The Sour Orange - Citrus x aurantium is a small evergreen shrub or small tree that reaches heights of only 10-30 feet tall. The Sour Orange has been naturalized in Florida, Georgia and Texas, but originated in southeastern Asia and South Sea Islands (Fiji, Samoa, and Guam). Sour Orange is grown in orchards settings only in the Orient/various other parts of the world where its special products are of commercial importance, including southern Europe and some offshore islands of North Africa, the Middle East, Madras, India, West Tropical Africa, Haiti, the Dominican Republic, Brazil and Paraguay. 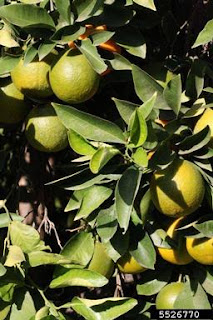 Image Citation:  NCSC Herbarium, Citrus ID, USDA APHIS ITP, Bugwood.org
The leaves of the Sour Orange are simply shaped ovate or elliptic, lustrous and deep green in color. The flowers are small, white in color and usually have 4 or 5 petals. The fruit is orange in color, round in shape with a thick almost leathery rind. Inside of the fruit is several separate sections or cells, each having at least a single seed. The fruit is fragrant, however it is generally too sour to be eaten on it's own. The primary use of Sour Orange is for the production of marmalade. The fruits are largely exported to England and Scotland for making marmalade. 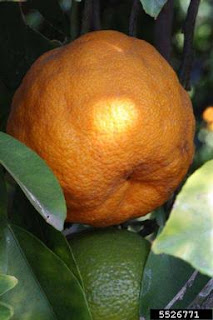