The Smoketree - Cotinus coggygria -  is a small deciduous tree and a native of the wooded hills above the Mediterranean.  Named for it's blooms of wispy filaments in either pink or cream that look like poofs of smoke radiating from the trees branches.   In some areas the tree is nicknamed the Mist Tree, Cloud Tree or even Jupiter's Beard.  It is a relatively low maintenance shrub/small tree classified as an ornamental.   With a max height of 10-15 ' tall and a spread of 12 ', the Smoketree grows at a medium rate of just 12-24 inches per year. 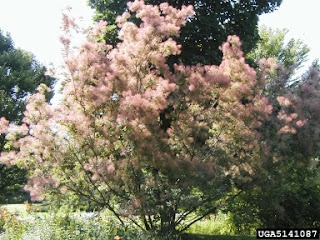 In addition to it's smoky filaments this tree also produces flowers from June to September that are not very noticeable they are yellow-pink to plain pink in color and are often hidden by the wispy hairlike filaments.  The leaves are small 1 1/4 to 4 inches long and a pretty blue green in color in season, changing yellow, purple and red in the fall.  When crushed the branches and leaves have an almost citrus smell often compared to an orange. 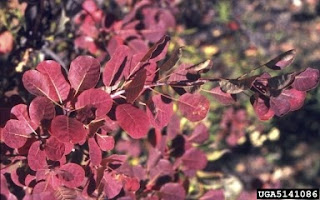 Image Citation:(1&2) The Dow Gardens Archive, Dow Gardens, Bugwood.org
Introduced in the America's in the mid 1600's, this tree makes for an interesting addition to any home/commercial landscape and is recommended for hardiness zones 5-8.  It is not particular when it comes to soil types and can handle both wet soil and semi drought conditions with ease.  This variety has been naturalized in ranges North of the American Smoketree from Illinois, Ohio, Maryland on North through Ontario and Vermont.  It is cultivated in the South as a specimen tree and is often found more often then the American Smoketree in this application.

The Sweet Birch or Cherry Birch (Betula lenta) is most easily recognized by the combination of fine and sharply toothed leaf margins, winter green scent, scales on the conelike fruit and dark brown almost black bark.  It is a deciduous tree that can reach heights up to 65 feet, but usually does not exceed 3.5 feet in diameter.  The tree grows in an upright form with a generally single eract straight trunk and a rounded crown.  The Sweet or Cherry Birch is native to the United States.  It prefers rich, moist soil, cool forest areas, mountain slopes, Appalachian hardwood forests.  It can be found naturally occuring from New York and Maine in the North to Northern Georgia, Alabama and Central Mississippi in the South.  It is not often confused with the closely related Yellow Birch as the bark is significantly different in not only color but texture as well (Yellow Birch has a yellowish exfolliating bark). 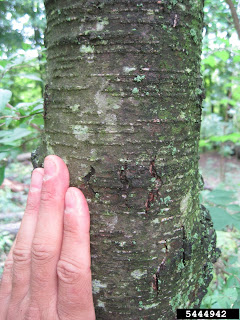 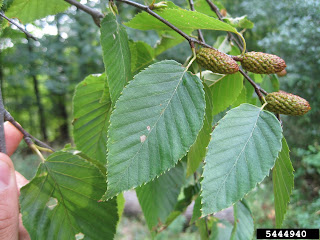