The Northern Bayberry - Myrica pensylvanica, is best recognized by its deciduous habit, with white-gray branches and flat coarsely toothed leaves with dots on the lowers surfaces.  The Northern Bayberry grows in a shrub or small tree form and reaches heights of not more then 7 feet.  It is very similar to the Southern Bayberry but differs in habitat and fruit size. 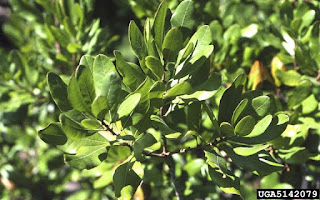 The range of the Bayberry is from North Carolina on North through Prince Edward Island and Newfoundland.  The northern Bayberry is recommended for zones 3-7 and can be readily found at most nurseries or home improvement stores.  It is an easily grown shrub that is very tolerant of drought, excess waters and erosion.   It typically grows in a rounded habit and can colonize in ideal growing conditions.  Most often found growing wild along coastal areas.  There are no known major diseases or pest concerns with the Northern Bayberry. 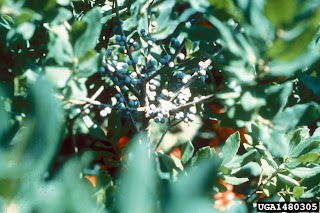 The leaves of the Bayberry are narrow, broadly oblanceolate, leathery, glossy, bright gray-green leaves (to 4" long) are dotted with resin on the undersides and aromatic when crushed.  Northern Bayberry is a mostly dioecious shrub (male and female flowers appear on separate catkins/plants).  Neither catkin is showy, with only the male flowers displaying any sign of  color which is a drab yellow-green. Flowers on female plants, if pollinated, are followed by attractive clusters of tiny, gray-white fruits in late summer which usually persist through the winter, but are not howy.  The fruits are covered with an aromatic, waxy substance which is used to make bayberry candles, soaps and waxes.  The fruits are attractive to birds.

Meet more Trees and Shrubs www.ArundelTreeService.com or Follow our blog www.MeetATree.com
Posted by Arundel Tree Service at 2:31 PM No comments:

The Guava, Psidium guajava is best recognized by the combination of stiff opposite leaves with very prominant venation, scaly bark and distinctive fruit.  It is an evergreen shrub or small tree that reaches heights of only 15 feet.   It grows in an upright fashion with a spreading crown.  The bark is smooth and red-green in color with bark that shreds in thin plates.

The leaves are opposite and simple in shape, thick, leathery, wedged at the base and with an abruptly shaped point on the tip.  The flowers have 5 petals and are white in color.  The fruit is green, yellow or pink in the form of a berry that is rounded or pear shaped.

The fruit of a Guava is different by species and can range from roughly skinned with a bitter flavor or soft skinned and sweet.  In Mexico the guava is made into beverages, sauces, candies, fruit bars, desserts and dried snacks.  In many countries the fruit is eaten raw like an Apple of quartered and eaten with salt and pepper or served in salads.  In Pakistan the Guava is the national winter fruit.  In the Phillipines Guava is used in cooking sinigang.  In Asia & Taiwan it is eaten with sweet and sour plum powder mixtures.

Meet more trees on our website www.ArundelTreeService.com  or follow our blog www.MeetATree.com
Posted by Arundel Tree Service at 1:54 PM No comments:

The Water Tupelo (Nyssa aquatica), is best identified by it's combination of wetland habitat and and large very long stalked leaves. They can reach heights upwards of 100 feet tall and are deciduous in their native range. The Water Tupelo grows in a erect and upright form with usually only one single trunk.

The bark of the Water Tupelo is grey and color and young twigs appear to have more of a reddish tone. The leaves are alternate, simple and ovate or oblong, wedge shaped or even heart shaped in some cases. The male and female flowers generally occur on separate trees and appear in compact clusters in the Spring. The fruit is oblong and dark blue to purple in color, borne singly on a conspicuous stalk, it matures in late Summer to early Fall.

The Water Tupelo is native to river swamps, floodplains, and lake margins from Virginia south to Northern Florida, West through Illinois and Southeast through Missouri, Arkansas and Eastern Texas.  The most similar species to the Water Tupelo is the Ogeechee Tupelo (Nyssa ogeche).

Meet more trees on our website www.ArundelTreeService.com or follow our blog www.MeetATree.com .
Posted by Arundel Tree Service at 1:41 PM No comments:

The Cockspur - Pisonia rotundata is a deciduous, mostly evergreen tree with leaves that are quickly replaced when the old leaves fall.  It generally grows in small tree or shrub form and can reach heights of 28 feet.  The branches generally grow in low branching form with a dense crown that is rounded or oval.  It is also called Pisonia or Smooth Devils-Claws. 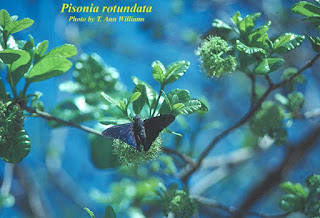 The bark of the Cockspur is an ash gray in color with obvious scarring.  The twigs are a yellowish green and are stout with dense fine hairs, becoming hairless with age.  The leaves are opposite or sub-opposite, leathery, stiff and oval or broadly elliptical.  The base of the leaves are rounded or broadly wedge shaped with a rounded tip that is often notched.  The upper surface is lustrous or a dull green with yellow veins that are raised and conspicuous.  The flower is uni sexual with male and female appearing on separate plants.  They are greenish white in color, the male are tubular or urn shaped with 10 stamens and the female are cup like and often tinged with red.  They appear in Mid to Late Spring coinciding with leaf expansion.  The fruit is a nutlet that is enclosed in a sticky perianth that is 7-10 mm long.  The fruit appears in the Summer and is quick to ripen. 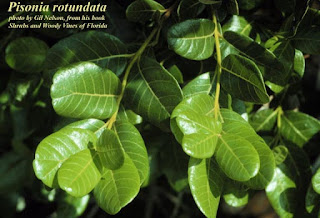 The tree is only native to the Hammocks and Scrub restricted areas of the Southernmost portion of North America (Most of Florida and the Florida Keys).

Meet more trees on our website www.ArundelTreeService.com  or follow our blog www.MeetATree.com
Posted by Arundel Tree Service at 11:22 AM No comments:

The Heart's A Bustin' - Euonymus americanus  is most commonly recognized by the opposite, sessile finely toothed dark green leaves and white flowers arising from the leaf axils.  It is usually found in multi-stemmed shrub form but rarely in small tree form.  It is also known as the Strawberry Bush or Bursting Heart.

Image Citation: Karan A. Rawlins, University of Georgia, Bugwood.org
The leaf margins are finely toothed with blades around 4 cm long and 2 cm broad.  The flowers are creamy white with petals in fours and generally white in color.  The fruit is a rounded knobby capsule that splits at maturity to reveal several red coated seeds.  The fruit of the Hearts a Bustin matures in the fall.

Heart's A Bustin is native to the Eastern and Southern portions of the United States.  The Northern range begins in the West from Southern llinois, through Indiana, Ohio, Pennsylvania, New Jersey, Long Island and the Southernmost portions New York in the East.  Southern range is from Texas in the West, through Louisiana, Mississippi, Alabama and Florida in the East.  It is most commonly found growing in moist woodlands, and flood plains from 0-500 m.

Meet more trees and shrubs on our website www.ArundelTreeService.com or follow our blog www.MeetATree.com.
Posted by Arundel Tree Service at 3:25 PM No comments:

The Sugar Apple - Annona squamosa, is a evergreen or semi-deciduous shrub or small tree with contorted branches an irregularly shaped crown, and limbs that often droop near the tips.  The fruits pulp is sometimes eaten raw or used in the production of beverages or sherberts.  It was introduced from the American tropics and is now found in the southern half of Florida and is completely naturalized in the Florida Keys.

The Saltbush - Baccharis halimifolia is a long seasoned deciduous tree or evergreen shrub that grows in a vase like form.  It is a member of the Aster - Asteraceae family.  It is easily identified by the fan shaped obvate leaves and white cotton like fruiting heads.  It is native to the South and Eastern United States in marshes, coastal swales, shores and coastal areas from New York to Florida in the East and Texas and Arkansas in the South.  It was originally found in only coastal areas but is now found in weedy disturbed sites and along roadsides inland.

The leaves are alternate, simple, obvate and narrow at the base, margins are coarsely toothed and grey-green in color.  The flowers are unisexual but each sex is born on a different plant.   The male flowers are compact with yellow inflorescence, while the female are more white at maturity with cotton like tufts that aid in seed distribution.

Meet more trees on our website www.ArundelTreeService.com  or follow our blog www.MeetATree.com
Posted by Arundel Tree Service at 11:02 AM No comments:

The Mango - Mangifera indica is a medium sized evergreen fruit bearing tree. The Mango grows in an erect form, mainly upright with and very dense spreading crown. At full maturity the tree can reach upwards of 50 feet tall. The Mango is native to South Asia and cultivated for it's edible fruit.By the 10th century AD cultivation had spread into portions of East Africa. Now it is also cultivated in Brazil, Bermuda, Mexico, and the West Indies, where the climate is ideal and very similar to it's native range. Mango are the national fruit of Indian, Pakistan and the Philippines.


The leaves of the Mango are alternate, unifoliate, lanceolate to narrowly long and elliptic. The upper surface is lustrous, dark green, hairless with conspicuous veins that are straight and parallel. The flowers are bisexual or unisexual, green-white in color with 5 petals and 5 sepals. Flowers appear in late winter and spring. The fruit is large, fleshy, ovoid, pear-shaped, and irregularly shaped drupe, generally red to pink in color with a large flattened seed. The seed contains fruit embryos which can not survive freezing.

The fruit does not grow in a uniform shape or size and fruit from the same plant can vary in size. When Mangoes were first imported they had to be pickled because of lack of refrigeration. Generally the Mango is sweet in flavor but the flavor and texture can vary greatly between different cultivars. Mangoes are widely used in cuisine, even in unripe condition when they are used for jams, chutney, fish sauces or pickling. Fruit drinks containing Mango are very poplar in India, though they contain high amounts of sugar or other flavoring so they are not marketed as fruit juice.

Recommended for only zones 10b to 11, Mangoes can not be grown in most of the United States. They are a tropical fruit and require tropical conditions to grow and survive, one single mild frost can kill a tree. Young trees are even more susceptible to frost damage then more mature, though once mature they are a bit more tolerant.

Meet more trees www.ArundelTreeService.com  or Follow our blog www.MeetATree.com
Posted by Arundel Tree Service at 10:42 AM No comments: