The Sugar Maple - Acer saccharum (also called Hard Maple, or Rock Maple in certain regions) is a deciduous tree that is well known for it's lovely vibrant fall coloring, large size, larger leaves and winged fruit. Growing in an upright erect form, generally with one single trunk, the Sugar Maple makes for a lovely focal point in any setting. It is Native to much of the Eastern portion of North America from Nova Scotia, Ontario and North Dakota, South from Georgia, Northern Alabama, Northern Louisiana, and Eastern Oklahoma. It slightly overlaps the Southern Sugar Maple in range in the Southern most growth areas only (LA, GA, & AL). The Sugar Maple is a slow growing, long lived tree with specimens recorded as old as 400 years. Commonly found as a tree of importance in various Eastern Forest types including, Hemlock/Northern hardwoods, Beech/Sugar Maple, Sugar Maple/Basswood, Cherry/Maple, and Red Spruce/Sugar Maple. 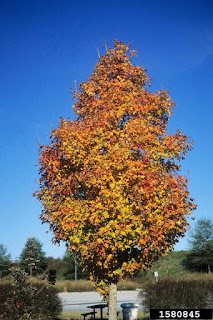 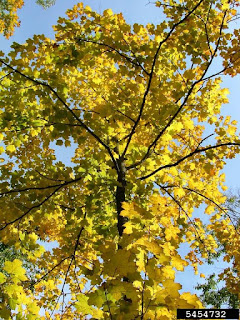 Image Citation: Jason Sharman, Vitalitree, Bugwood.org
The bark of the Sugar Maple is smooth and Gray when young, becoming irregularly furrowed, scaled and darker with maturity. The leaves are opposite, simple, thin, firm and broader then they are long. Upper leaf surfaces are a dark yellow/green in color, palmately veined with a paler yellow/green or whitened underside. Leaf blades range in size from 7-20 cm long and broad. In the fall the leaves turn a brilliant Red, Yellow or Orange in color.  The flowers of the Sugar Maple are tiny they contain 5 sepals that are green/yellow in color, occurring in clusters near the leaf axil in Mid-Late Spring on thin/long drooping stems. The fruit occurs in early Fall in the form of paired samaras that are 2-3 cm long, the pair of samaras almost always forms a U shape where connected.
The Sugar Maple is a very popular tree and can be found at almost any nursery in hardiness zones 3-8. It can be grown as both a shade tree and an ornamental, be careful when planting this tree as although it is a slow grower it will get very large with age 65-75 feet tall and 40-50 feet broad (canopy). The Sugar Maple prefers partial shade or full sun and deep, well-drained, acidic to slightly alkaline soil. Sugar Maple also has a moderate drought tolerance. Sugar Maples are commonly browsed upon by Whitetail Deer, Squirrels, Moose and Snowshoe Hares. Sugar Maple is the Official State tree of New York, West Virginia, Wisconsin and Vermont (more states than any other tree).
Meet more trees on our website www.ArundelTreeService.com or follow our blog https://arundeltreeservice.meetatree.com/
Posted by Arundel Tree Service at 12:47 PM No comments: