The Rubber Tree - Hevea brasiliensis, is also called Sharinga Tree, Rubberwood or Para Rubber Tree.  It was only originally found growing in the Amazon Rainforest but was planted in more widespread tropical and sub-tropical areas once the demand for it's naturally produced rubber increased.  This tree is a member of the Euphorbiaceae family and has major economic value because of it's milky latex that naturally occurs within the tree.  Recorded uses of this and similar tree rubber/latex products date back to the Olmec people of Mesoamerica some 3600 years ago.  By the late 1800's rubber plantations were established in the British colonies, Java, and Malaya.  Today most rubber plantations outside of the native region occur in tropical portions of South/East Asia and West Africa. Cultivating in South America has not been satisfactory because of leaf blight this leaf blight is a major concern for plantations worldwide as it has not been cured or corrected and is thought to pose a threat to all varieties/clones growing today. 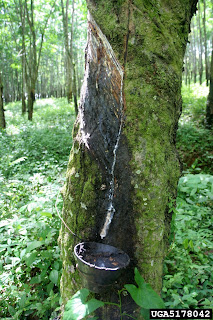 Image Citation: David Cappaert, Michigan State University, Bugwood.org
This latex that occurs in the Rubber Tree is the primary source of natural rubber, it occurs in vessels within the bark just outside of the phloem. The vessels spirals up and around the tree in a right handed helix pattern forming an angle of about 30 degrees and occurring at heights of up to 45 feet.  In the wild the tree has been found to reach heights upwards of 100 feet, but this is not very common.  Trees grow at a much slower rate once they are tapped for latex and are generally cut down after about thirty years as they usually stop producing at this point so they no longer have economical value.  When harvesting cuts are made in the vessels but only deep enough to tap into them without harming the trees growth.  In order to grow these trees require tropical or sub-tropical climates, with no chance of frost.  One simple frost event can completely wipe out a plantation and be detrimental to production as the rubber becomes brittle and breaks.  Latex production is not very reliable the amount and quality is variable from tree to tree. When a tree is tapped (the process is called rubber tapping) the latex is collected in small buckets and looks almost similar to the process used to collect syrup from Maple trees.
Meet More Trees on our website: www.ArundelTreeService.com  or Follow our Blog: www.MeetATree.com
Posted by Arundel Tree Service at 11:30 AM