The Sawtooth Oak - Quercus acutissima is most easily recognized by it's fringed acorn cup and narrow leave with bristle tipped teeth, resembling the teeth of a saw. It is a fast growing, deciduous shade tree that can reach heights of 30- 70 feet tall. Sawtooth Oak grows in an erect fashion with a single trunk and dense rounded crown. Originally introduced from Asia, generally found in planned landscapes and is reported to be naturalized in scattered areas from Pennsylvania South to North Carolina and Georgia, South to Louisiana. Sawtooth Oak is primarily planted for wildlife cover and food due to it's abundant fruit and fast growth habit. This species is sometimes used for urban and highway beautification as it is tolerant of soil compaction, air pollution, and drought.  Though it is considered naturalized in our area it is not very common to see a mature tree other then in a established landscape setting where planted. 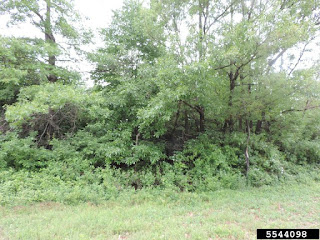 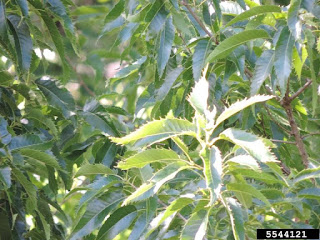 Image Citations (Photos 1 & 2): Richard Gardner, UMES, Bugwood.org
Named for it's unique leaf edges, the Sawtooth Oak is a beautiful tree. The green leaves are alternate, simple, oblong or obvate, 12-16 pairs of sharp bristle tipped teeth, parallel veins and a lustrous upper surface and dull pale underside. The leaves add to the visual interest by beginning a brilliant yellow to golden yellow color in the Spring, turning dark lustrous green in summer and yellow to golden brown in the fall. The bark is dark gray in color with light gray scales that become deeply furrowed with age. The fruit is in the form of an acorn, the cup encloses 1/3 - 2/3 of the 1-2.5 cm nut. The acorn rim is adorned with long spreading hairlike scales that form a distinctive fringe.
Recommended for hardiness zones 5-9, the Sawtooth Oak can be found at most larger nurseries within those zones. Sawtooth Oak is also considered to be easily transplanted and hardy making it a wise choice for any landscape with room for a large spreading shade tree. It is similar to the Chinquapin Oak Castanea pumila in appearance, distinguished primarily by the difference in fruit.