The Survivor Tree of Oklahoma City is an American Elm that is approximately 90 years old, located in the heart of downtown Oklahoma City. Amazingly it survived the bomb attack on the Murrah Federal Building on April 19, 1995, 23 years ago today. This bombing was the most destructive act of terrorism on American soil before September 11, 2001, the bombing killed 168 people and injured hundreds more. Before the bombing, the tree provided the only shade in the building’s parking lot. It is said that people would arrive early to work just to be able to park under the cooling shade of the tree’s branches. After the bombing, the tree was partially cut down to recover pieces of evidence embedded in it from the force of the devastating bomb. Investigators were successful in recovering evidence from the tree’s trunk and branches.  Even after the destruction of the bombing and the destruction during the recovery efforts the tree lived on, a testament to what it means to survive. 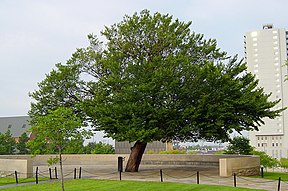 Title: The Survivor Tree at Oklahoma City Memorial (2004) Phtotgrapher: Dustin M. Ramsey
The Oklahoma City National Memorial and Museum was created to honor “those who were killed, those who survived, and those changed forever” by the 1995 bombing. Hundreds of community citizens, surviving family members who lost loved ones, survivors, and even rescue workers came together to write the mission statement for the memorial. It was decided that “one of the components of the Memorial must be the Survivor Tree located on the south half of the Journal Record Building block.” The Memorial design was unveiled in 1996 with prominence put on the remarkable Elm that had survived so very much. With this, the Survivor Tree has become a symbol of human resilience. Today, as a tribute to renewal and rebirth, the inscription around the tree reads, “The spirit of this city and this nation will not be defeated; our deeply rooted faith sustains us."  The tree is a part of the museum, the museum grounds also include a reflecting pool and memorial markers honoring each of the 168 lives lost during the tragedy.

Seedlings from the Survivor Tree are currently growing in Nurseries throughout the state.  Each year Nurserymen are given hundreds of seeds by the Facilities and Grounds Crew to continue it's legacy.

Located at 620 N Harvey Ave, Oklahoma City, OK You can visit this "WITNESS TO TRAGEDY, SYMBOL OF STRENGTH"