The Paper Mulberry - Broussonetia papyrifera, is a deciduous fast growing tree that reaches heights of only about 30-60 feet tall.  Paper Mulberry grows in an erect fashion with a single or multiple trunk, often producing root sprouts and branching low to the ground, the crown is broad and rounded.  Originally introduced from Asia in the mid 1700's  it is cultivated and established in the Eastern united States from Delaware to Southern Illinois on South from Florida to eastern Texas. 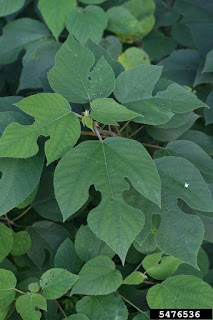 Image Citation: Chris Evans, University of Illinois, Bugwood.org
The bark of the Paper Mulberry is smooth, tan in color and occasionally furrowed.  The twigs are brown with scattered, slightly raised lenticels and long spreading transparent hairs.  The leaves are alternate, opposite and whorled, simple, ovate, with a rounded base, and flattened heart shaped or broad wedge shape, toothed along edges.  Upper leaf surfaces are dark brown green in color becoming deep green with age.  The lower surface is hairy, velvety at maturity.  The flowers are unisex, tiny, with male and female produced on separate trees, female inflorence occur in a rounded cluster, the male are elongated cylindric catkin 3-8 cm long occurring in Spring.  The fruit matures in Summer and is rounded in a ball like cluster of fleshy calyces that are 2-3 cm in diameter, each calyx encloses a red or orange achene that visibly protrudes on ripe fruit. 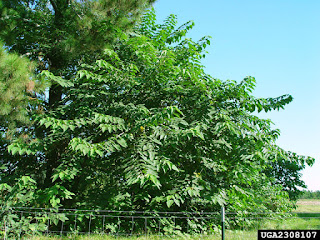 Image Citation: Chuck Bargeron, University of Georgia, Bugwood.org
Broussonetia is a genus of only 4 species all are from East Asia or the Pacific Islands.  Paper Mulberry is recommended for hardiness zones 4-8. Meet more trees on our website www.ArundelTreeService.com or follow our blog https://arundeltreeservice.meetatree.com/
Posted by Arundel Tree Service at 12:51 PM