The White Ash - Fraxinus americana, is best identified by it's opposite compound leaves with 5-9 leaflets that are whitish on the undersides. It is a large deciduous tree that reaches heights of 40 - 90 feet tall, it grows in a erect fashion with a single trunk. It is native to upland woods, floodplains, dry hills, hammocks, and cove forests. It's range is widespread along the East coast, from Ontario, New Brunswick and Quebec in the North, West through Eastern Nebraska and Eastern Texas. 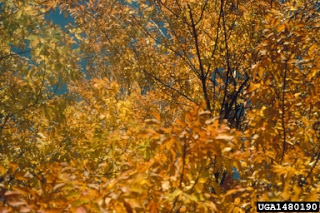 The bark is scaly, grayish, narrowly ridged and furrowed with furrows forming diamond patterns towards the base. The leaves are opposite, pinnately compound, 5-9 ovate leaflets with bluntly toothed margins. The upper leaf surfaces are dark green while the lowers are whitish, hairy when immature. Fall leaf color ranges from red to maroon to yellow. The fruit is a narrowly elliptic or linear samara that ranges from 2.5-3.2 cm long that matures in late summer to early fall each year. 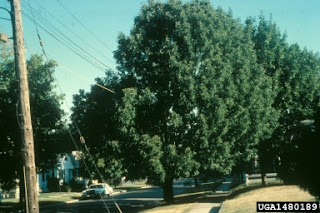 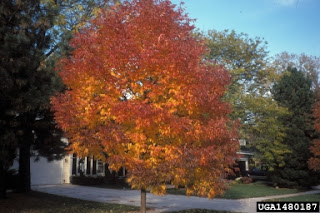 Image Citation (Image 2 :Spring Foliage & Image 3:Fall Foliage): Richard Webb, Bugwood.org
There are three other variations of White Ash that were originally grouped together as one species. They are now identified as individual species the Texas Ash - Fraxinus albicans Buckley, Biltmore Ash - Fraxinus biltmoreana Beadle, and Fraxinus smallii. The ranges of these smaller species are much smaller and overlap the native range of the White Ash but not one another.
Meet more trees on our website www.ArundelTreeService.com or Follow our blog www.MeetATree.com
Posted by Arundel Tree Service at 9:04 AM