The Quaking Aspen - Populus tremuloides - is also called the Trembling Aspen, Golden Aspen or Mountain Aspen. With the smallest of breezes the leaves will flutter hence it's name. When fluttering the leaves even making an audible sound which would explain why the Onondagas called it the "nut-kie-e" which means noisy leaf. This tree has a very remarkable native range covering a majority of the Northern portion of the continent, ranging from New Foundland South to Delaware in the East and along the Coast of Alaska and British Columbia running South through the Rocky Mountains. Although it is not found in the South it does have one of the widest distributions of any tree in North America. It can be grown throughout hardiness zones 1-7. It is often times one of the first trees to appear after a Forest Fire. It is a fast grower often gaining 24 inches in a single season. Aspen wood Is used to make a variety of items such as wooden toys, tongue depressors, popsicle sticks, clothes pins, crates and even for paper pulp. 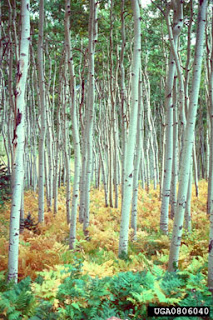 Image Citation (Stand): Dave Powell, USDA Forest Service (retired), Bugwood.org
The leaves are rounded triangles with small teeth along the margins. The leaves are a glossy green above and dull below, during the Spring they change to a vivid Yellow or very rarely Red. They are arrranged alternately on the branches. Catkins are long and silvery and appear between April and May. In the late Spring, it's tiny seeds which are enclosed in cottony tufts are dispersed by the wind. The bark is a Greenish-White to Grey in color, it is often marked with black knots or horizontal scars. 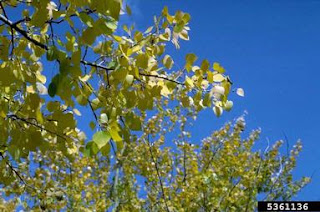 Image Citation (Fall Foliage): Howard F. Schwartz, Colorado State University, Bugwood.org
The Aspen is a favorited food and shelter source for many different type of wildlife. The leaves and bark are eaten by Deer, Elk and Hare/Rabbits. The Buds are an important food source for Grouse during Winter. Beavers not only feed from the Aspen, they also use it's lumber as a building material. Many different birds and butterflies make their homes in these stands.
The Aspen holds the the title of largest living organisms on Earth, growing in clones/stand that reproduce primarily by sending up sprouts from their roots. For the most part each clone within a stand is connected to the next one through it's root system. One clone/stand in Utah (where it is the State tree) has been determined to have over 47,000 stems, this stand is estimated to weigh over 6,000 tons! While individually each stem lives 100-150 years, Aspen stands are one of the longest living organisms. One clone in Minnesota is estimated to be 8,000 years old, making it one of the longest living organism on Earth.
Meet More Trees www.ArundelTreeService.com or follow our blog www.MeetaTree.com
Posted by Arundel Tree Service at 11:16 AM