The Overcup Oak - Quercus lyrata, (also called Swamp Post Oak, Swamp White Oak, or Water White Oak) is a medium sized southern deciduous tree that does not generally reach heights of more then 60-90 on average.  It grows in an erect form with a single trunk that is usually short in comparison to other Oaks.  The tree generally has a symmetric form with slender, most times with dropping branches, crown of open grown trees are often have lateral branches that spread perpendicular to the trunk. 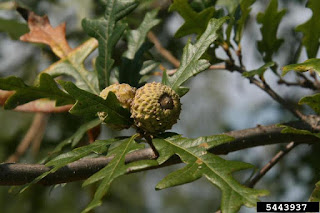 Image Citation: Chris Evans, University of Illinois, Bugwood.org
The name Overcup Oak comes from the fact that the "cup" of each acorn almost completely covers each nut.  The lumber from the Overcup Oak has little commercial value, primarily because of it's spiral grain, frequent knots and tendency to crack or split open during the drying process.   The leaves are alternate, 6-8 inches long and 1-4 inches wide with deep sinuses and 5-9 rounded lobes.  The leaf base usually tapers from a thin point to the widest lobes that occur around the midway point of each leaf. 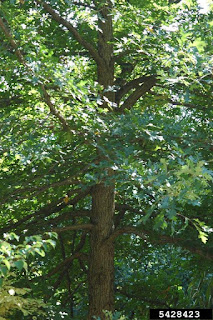 Image Citation: Karan A. Rawlins, University of Georgia, Bugwood.org
Most commonly found growing in flooded low land areas, river bottoms or swamps.  It grows best on wetter sites around the Coastal or Gulf Plains from Delaware in the North south from Florida to Eastern Texas and up the Mississippi River bottoms through Southeastern Missouri, Southern Illinois, Southwestern Indiana or Western Kentucky.

Meet more trees on our website www.ArundelTreeService.com or Follow our blog https://arundeltreeservice.meetatree.com/
Posted by Arundel Tree Service at 9:01 AM