The Mountain (Fraser) Magnolia - Magnolia fraseri is most easily identified by the combination of gray colored trunk, leaves that are eared near the base and hairless buds and twigs. It is also referred to in some areas as the Mountain Magnolia.  Native to rich woods and cove forests from 300-1520 m, this species is confined mostly to the Southern Appalachians, found in Virginia, West Virginia, Kentucky, Tennessee and Northern Georgia. It is similar in appearance to the Pyramid Magnolia and is often only distinguished by the native range and habitat. 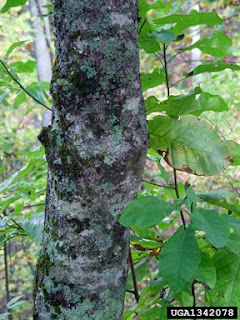 Chris Evans, University of Illinois, Bugwood.org
The Fraser Magnolia is a deciduous tree that reaches heights of about 80 feet tall. It grows in an upright and erect form with either a single or multiple trunks, the crown is spreading, irregular and most often high branching. The bark is gray to gray-brown in color and smooth or just slightly roughened, sometimes it is compared to concrete in appearance. The leaves are produced in whorl like clusters near each branch tip, they are simply shaped, ovate or nearly spatulate (spoon shaped). The leaves are broadest near the tip becoming more narrow closer to the base which is eared. The upper leaf surface is green and hairless, while the lower is paler in color. The entire leaf becomes a coppery brown at maturity. The flower is creamy white in color, 16-22 cm in diameter, fragrant and showy usually with 9 tepals each occurring in late Spring annually. The fruit is in a cone like form, shaped like a small cucumber, ranging in size from 6-13 cm long. Fruit is green when young, changing to pink when mature. Once mature each fruit splits to reveal bright red seeds that are 7-10 mm long. Fruit matures in late Summer or early Fall each year. 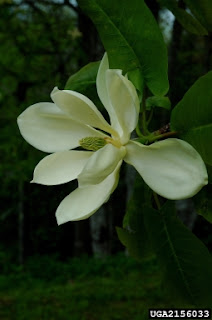