The Mahaleb Cherry - Prunus Mahaleb, is the only Cherry that grows in the Eastern portion of North America with primarily rounded or circular leaves.  It is a small deciduous tree that only reaches heights of 25-35 feet tall.  It was originally introduced from Eurasia and has become naturalized along roadsides, fields and vacant lots from 0-1000 m.  Found in the Eastern portion of the United States from Massachusetts, New York and Ontario in the North, South through North Carolina and and Oklahoma.  It is also found established in scattered areas in the West. 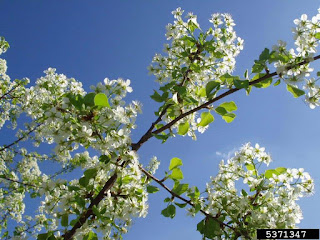 Image Citation: Jan Samanek, Phytosanitary Administration, Bugwood.org
The leaves are alternate, simply shape, oval to nearly circular in shape, the base rounded and tip pinched to a sharp point.  The upper leaf surface is lustrous and dark green in color, while the lower is paler and hairy at the mid-vein. The flower averages 18 mm in diameter with 5 petals, white in color, circular in shape.  The fruit is black or red-black in color, a rounded drupe that averages 8 mm in diameter. 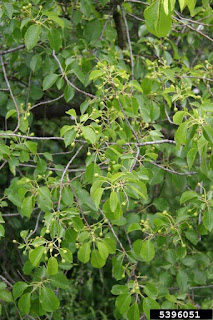