The Lilac Chastetree - Vitex agnus-castus was originally introduced from Eurasia but has naturalized through the South and Middle to South Eastern United States.  It is found from Southeastern Pennsylvania and Kentucky in the North to Florida and Texas on West through California in the West.  It is distinguished by the combination of palmately compound, 5 parted leaves, and lavender flowers.   It is a deciduous strongly aromatic shrub or small tree that reaches heights of 10-25 feet on average and grows in an erect form.  Generally a single trunk but sometimes found with multiple stems, a rounded crown that is dense in shape. 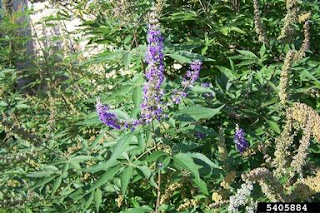 Image Citation:  Karan A. Rawlins, University of Georgia, Bugwood.org
The bark is reddish brown or brown in color, smooth when young becoming finely fissured and scaly with age.  The leaves are opposite, palmately compound, with 3-9 leaflet but usually 5, lanceolate tapering to a sharp tip.  The upper leaf surface is dull green in color and hairless moderately lustrous, the lower surface is grayish green in color.  The flowers are about 1 cm long,  5 petals, lavender, blue or white in color.  The flowers are born in erect terminal clusters that are 12-18 cm long.  The flowers occur in the Summer before the fruit which appears in late summer to early fall. The fruit is round, dry, hard drupe that contains a 4 parted stone. 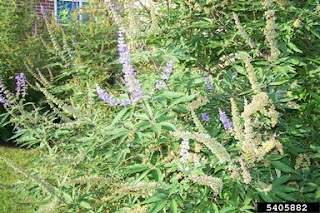 Image Citation:  Karan A. Rawlins, University of Georgia, Bugwood.org
The Vitex - Chasetrees are a family of more then 250 species distributed in mostly tropical or subtropical regions of the world.  Several are grown as ornamental and other are used for lumber production.  Only 4 of the Vitex have naturalized in the East.  There are both deciduous and evergreen trees and shrubs.

Meet more trees on our website www.ArundelTreeService.com or www.MeetATree.com
Posted by Arundel Tree Service at 11:25 AM