The Blue Ash - Fraxinus quadrangulata is a medium sized deciduous ash tree that is native to the Midwestern portion of the the United States.  It is most commonly found from Oklahoma North through Michigan, into the Bluegrass regions of Kentucky and lower Nashville basin of Tennessee. There are also small isolated populations growing in small areas of the Appalachian Mountains, Alabama and Southern Ontario.  On average the height at maturity can range from 30 - 85 feet depending on the terrain, location and soil type the tree is growing in. 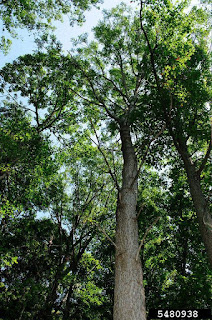 Image Citation:  Vern Wilkins, Indiana University, Bugwood.org
The twigs of the Blue Ash are unique having four cork like ridges that gives them an almost squared appearance when a cross section is cut.  The leaves most often are made up of 7 leaflets and average 7 1/2 - 15 inches long, with individual leaflets  ranging in size from 2 - 5 inches each.  The green leaves are coarsely serrated along the margins with short and distinct petiolules, they become more yellow in the fall.  The small purplish flowers occur in the early spring before the leaves appear.    The fruit is a Samara that is 1-2 inches long and 1/4 to 1/2 inch broad including the attached wing. 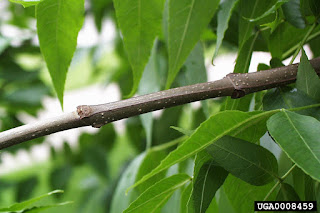 Image Citation: Paul Wray, Iowa State University, Bugwood.org
The various products of the Blue Ash have many uses.  A blue dye can be extracted from the inner layer of the tree through water immersion.  Pioneers used this dye to color yarn and other textiles used for sewing, crocheting, knitting and weaving.  The wood can be used to make flooring, baseball bats, tool handles, crates and furniture.  The name Blue Ash was also adopted by the City of Blue Ash in Ohio because of the number of trees growing in the area and the great use of the lumber in early buildings throughout the area.
The Blue Ash has not been as greatly impacted by the Emerald Ash Borer as the other North American Ash species.  The beetle has spread throughout most of this trees natural range.  When infestation occurs in an area 60-70% of these trees survive, where other Ash trees may on have a survival rate of 1-2%.
Meet more trees on our website:  www.ArundelTreeService.com  or follow our blog: www.MeetaTree.com
Posted by Arundel Tree Service at 1:30 PM