The Carolina Hemlock - Tsuga caroliniana, is a member of the Pinaceae (Pine) family and of the genus Tsuga.  It is Native to areas with nutrient poor soil and low risk of fire, most often found growing slong side mixed hardwoods-conifer stands and Rhododendron understory from 600-1500 m.  Carolina Hemlock can be found growing from southwestern Virginia, eastern Tennesee, western North Carolina South Carolina and northwestern Georgia. 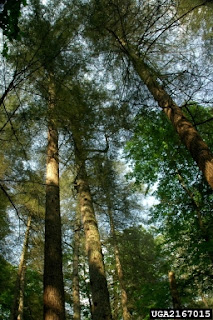 Image Citation:William M. Ciesla, Forest Health Management International, Bugwood.org
The Carolina Hemlock is an attractive tree but does not have a high commercial value and is rarely grown ornamentally.   Reaching heights of 60 feet tall it is very similar in appearance to the Eastern Hemlock.  The cone of the Carolina Hemlock is ovoid to oblong, 2.5-4 cm long and 1.5-2.5 cm broad.  The cone scales spread widely as the cone dries out.  The twigs are light brown, smooth and thinly covered with short dark hairs.  The leaves are in the form of 10-20 mm long flat and slightly downcurled needles that spread in all directions from the twig. 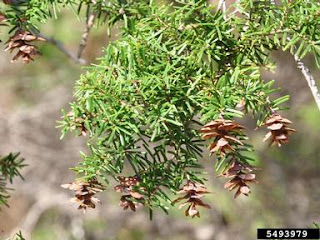