The Sparkleberry - Vaccinium arboreum, is best recognized by the combination of reddish bark, bell shaped flowers and lustrous green leaves with a tiny point on the tip. It is an evergreen in most locations or late deciduous in colder climates. It grows in an upright fashion small bush or tree form. It is native to North America, dry sandy woodlands, thickets and clearings.  It is widespread on the East Coast of North America, found from Ontario in the North and Florida in the South, West through Kansas and Eastern Texas. 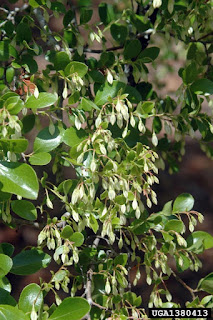 Image Citation: Chris Evans, University of Illinois, Bugwood.org
The bark is reddish brown to molted gray in color that often peels in plates or sheets.  The leaves are alternate simply shaped and firm in texture, the upper surfaces are lustrous and dark green in color.   The flowers are white in color, usually around 4 mm long and cup shaped.  The flowers occur in the Spring Season.  The fruit is a black berry that is dry in texture and 5-9 mm in diameter occurring in late Summer to early Autumn.
Meet more trees and shrubs on our website www.ArundelTreeService.com  or follow our blog www.MeetATree.com
Posted by Arundel Tree Service at 12:32 PM