The Cryptomeria - Cryptomeria japonica is a monoecious ornamental evergreen tree that can reach heights upwards of 65-70 feet.  Growing in a slender, upright pyramidal fashion, it has unique short, sharp in-curved needles that are unique to this species and only the rare Taiwania (a similar species).  The needle-like leaves are 3-12 mm long and  spirally arranged. The bark is reddish brown to dark gray, fibrous and often peels off in strips. The cones are brown, slightly rounded with an apical point and are borne at the tips of the twigs in groups of 1-6.  The branching habit of this species is considered to be irregular and does not occur in a uniform fashion. 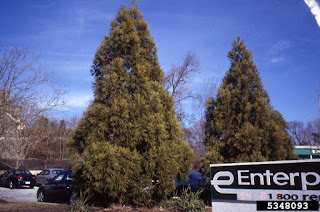 Image Citation (Mature Cryptomeria): Richard Webb, Bugwood.org
The Cryptomeria is native to only China and Japan, but has been successfully grown as an ornamental in the United States. In it's native range specimens are known to live more than 1700 years and reach diameters of almost 10 feet.  It is the national tree of Japan where it is often planted at temples and shrines.  In the US, the best specimens are found in regions with warm and moist summers.  The Cryptomeria is sometimes also called Sugi or Japanese Cedar.  This species prefers moist, rich, fertile, acidic, but well-drained soils in full sun and can only tolerate some light shade.  This tree is recommended for US hardiness zones 5-9 and is considered to be a low maintenance large specimen or screen tree. 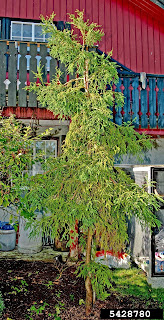