The Inkwood - Exothea paniculata also called Butterbough is an evergreen shrub or small tree that reaches heights of up to 50 feet in height. It is most easily identified by its compound leaves with 4 leaflets. It grows in an erect, upright form with a single trunk and narrowly rounded crown. 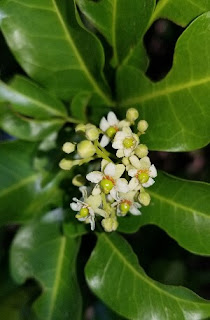 (Photo By: Michelle M. Smith, 2018 - In habitat, Ned Glenn Nature Preserve, Florida)
When young the bark is bright, reddish-brown becoming dark gray and fissured with age. The leaves are alternate, pinnately compound with an even number of leaflets, 2-6 in number but usually 4. Each leaflet is elliptic or oblong in shape with a rounded tip and slight notching. The upper surface of the leaves are lustrous and dark green in color, while the lower is a paler green. The flowers are unisex and white with the male and female occurring on separate plants. The flowers contain 5 petals, 5 sepals and generally 8 stamen and occur from late winter to early spring. The fruit is a fleshy berry that is red when young becoming purple or almost black when mature. Fruit reaches maturity annually in Summer.
The Inkwood is native to only the the very southernmost portion of Florida and the Florida Keys. It prefers hammocks and shell mounds. It is a member of the Exothea genus which contains only 3 species all but 1 are native to the Caribbean, the Inkwood is the only member native to the United States.
Meet more trees on our website: www.ArundelTreeService.com or Follow our Blog www.MeetATree.com
Posted by Arundel Tree Service at 9:25 AM