Mockernut Hickory - Carya tomentosa is also called the Bullnut, Hognut, Mockernut, White Hickory or Whiteheart Hickory (Depending on the region it is located in).  The Mockernut Hickory is a large deciduous tree that can reach heights of up to 100 feet in ideal conditions.  It is native to the United States and can be found growing from Massachusetts and New York in the North, west to southern Michigan and Northern Illinois, south to eastern Texas and east to northern Florida.  Mockernut Hickory is considered to be a tough tree and can take abuse, it's timber is used for tool handles. 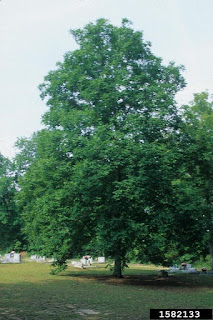 Image Citation: John Ruter, University of Georgia, Bugwood.org
The main trunk of the Mockernut Hickory is free of branches before spreading into a thick oblong shaped crown.  Tha bark is a mousy gray in color with very tight interlocking flat or slightly rounded ridges that appear to be almost laced together over the crevices.  The bark pattern gives the trunk the illusion of being wrapped in tight netting.  The leaves are alternate, compound and 8-12 inches long with 5-9 leaflets each that are a deep green in color.  In the fall the leaves change to a bright yellow, yellow-brown and finally brown before falling to make room for next seasons new growth.  The leaflet bottoms and leaf stalks are covered with fuzzy hairs and the edges are finely - coarsely toothed.  When crushed the leaflets release a strong odor.  The nuts have very small fruit cavities and are clothed in thick round or pear shaped husks with indented seams.  The nuts are a favorite meal for squirrels. 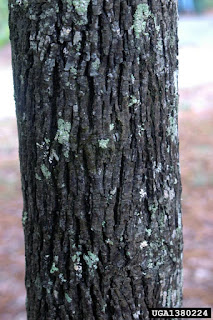 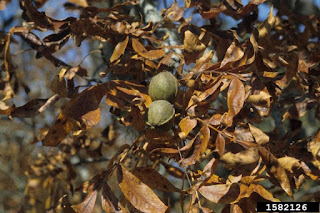