The Gray Birch - Betula populifolia Marshall, is most easily distinguished by it's triangular leaf with flattened base, elongated tip and doubly toothed margins.  It is a deciduous tree that reached heights of about 40 feet.  Generally growing in a multi trunk, curving or leaning fashion it makes for a beautiful focal point in both residential and commercial landscape settings. 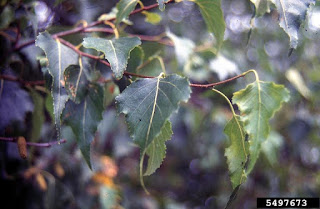 The bark of the Gray Birch is red-brown when young, becoming a gray or chalky white when mature.  The bark is smooth and tight, not usually exfoliating like some other Birch (Betula) varieties.  The leaves are alternate, simply shaped, thin and pendulous.  The triangular leaves are often compared in size and shape to those of the Quaking Aspen.  Leaf color ranges from a lustrous green in the Spring to a yellow or yellow-orange in the Fall.  The flower appears in late Spring in the form of a cylindrical catkin.  The fruit is a winged samara with wings broader then the body, they are borne in a narrow, bluntly pointed, erect or drooping structure. 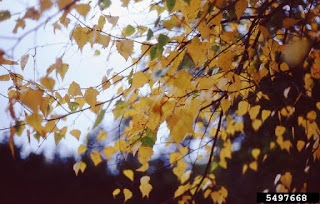 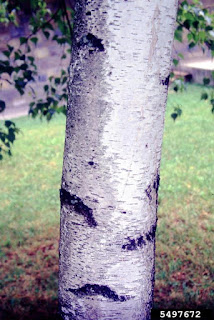 Image Citations (Bark & Leaves): T. Davis Sydnor, The Ohio State University, Bugwood.org
The Gray Birch is native to the North East and Mid Eastern portions of the United States and extreme South Eastern portions of Canada.  It can be found from North Carolina and Virginia in the South, Illinois and Indiana in the West, New Brunswick, Quebec and Ontario in the North.  It prefers moist, well drained, rocky or sandy forests, abandoned sites (fields, pastures) and can often be found on natural reforestation sites that have been burned, or cleared.  Hybrids of the Gray Birch and Mountain Paper Birch are often called Blue Birch .
Meet more trees on our website www.ArundelTreeService.com  or follow our blog www.MeetATree.com
Posted by Arundel Tree Service at 12:01 PM