Chickasaw Plum - Prunus angustifolia, is a thicket-forming small tree that has an early blooming habit and folding leaves. It is deciduous and reaches heights of only 20 feet tall.  It grows in an erect fashion with multiple trunks and a thicket forming habit.  It is native to the United States from New Jersey to Pennsylvania in the North to Florida, Nebraska, Colorado and New Mexico in the South and West.    Commonly found on roadsides, in old fields, sandy clearings, rural homesteads, thickets, in open woods, dunes pastures from 0-600 m. 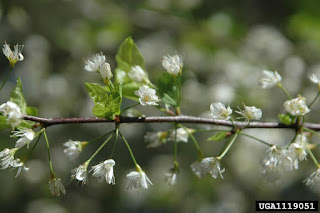 The bark is a dark reddish brown to gray, splitting but not exfoliating.  The leaves are alternate, simple, lanceolate, narrowly elliptic or oblong, upward folding from the mid rib, with a wedge shaped base.  The upper leaf surface is lustrous, bright green, hairless with a dull under surface. The flowers are 7-10 mm in diameter, 5 petals, 10-20 stamens each, with white filaments.  The fruit is ovoid or ellipsoid red or yellow drupe, 1.5-2.5 cm in diameter.  The fruit is considered to be pleasant tasting and can be used for making wine, jam and jellies. 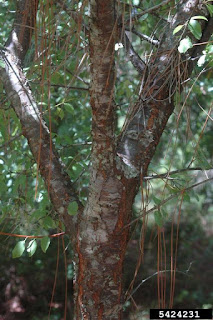 The thickets are used by cattle for shading and protection from the summers heat.  When thickets form a majority of a cattles grazing area they tend to gain weight faster.  The thorned thickets are a popular plantings for songbirds and game bird nesting and roosting.   The fruit is eaten by numerous birds and small animals.  Lesser prairie-chickens use the cover of the thickets for cooling during the day.  Fire can damage the thickets but does not generally kill the plantings.