The Leitneriaceae Family currently only contains one single species, the Corkwood Leiterneria floridana.  The Corkwood is a very sporadically distributed species found only in Northern Florida, Southeastern Texas, Eastern Arkansas and the far Southeastern region of Missouri.  It is most commonly found growing in swamp areas, depressions, ponds, roadside ditches or bordering tidal marshes.  It is easily recognized in it's native regions by it's very upright form combined with elliptical leaves, catkins, and tan colored lenticels found within the red-brown bark.   The Leitneriaceae florida is included on The IUCN Red List of Threatened Species as a "Near Threatened/Lower Risk" species because of its very small number (limited by a very small native range), thought they do not show a significant decline in the population.  Leiterneria floridana was only first discovered in 1835, in the saline marshes of Florida where the Apalachicola River empties into the Gulf of Mexico. 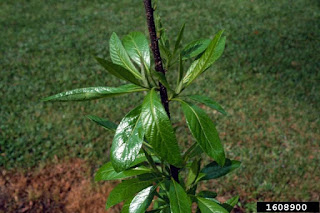 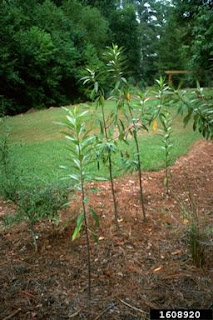 Image Citations (Photos 1 & 2) : John Ruter, University of Georgia, Bugwood.org
The Corkwood is a small deciduous tree or shrub that only averages 15 feet in height at maturity.  Corkwoods always grow in a very upright form and generally have one single straight trunk with a narrow crown containing very few branches.  The leaves appear in alternately in simple narrow elliptical form.  The upper portions of each leaf is lustrous, leathery and medium green in color, while the lower surface is a more dull pale green.  The leaves have fine hairs on the surface when young, becoming hairless when mature.  The foliage is among the most persistent of the deciduous autumn leaves, remaining green till late November (in the more northern portions of it's range), then becoming greenish-yellow. The flowers are unisex with male and female flowers on separate plants.  The male flowers appear in upright grey-brown catkins that are 2-5 cm long,  while the female appear in reddish catkins that are 1-2 cm long.  The fruit occurs in a single seeded ellipsoid drupe that is yellow-brown in color.  The wood of the Corkwood is very fitting to it's name as it is extremely lightweight.  The wood is often compared to balsa wood and can be used in similar applications.  Corkwood is the lightest weight of all of the native Eastern North American trees.  Portions of the trunk/stems have even been used to craft fishing floats.
The Corkwood - Leiterneria floridana is not the same as the shrub also commonly known as Corkwood - Stillingia aquatica (of the Euphorbiaceae family).  The genus, Corkwood Leiterneria floridana is thought by many researchers to be related to the similarly pollenated quassia family (Simaroubaceae), though they retain very unique and identifiable features that easily separate the two.
In Italy a single compressed endocarp was collected from the Villa San Faustino site in Italy.  This single specimen shows that until the Early Pleistoncene period Leitneria venosa grew there.  Leitnera is also listed as a species found within the early Pliocene San Gimiginiano flora. Several other similar endocarps have been found on other sites in Northern Italy dating all the way up to the Cenozoic period, though rare. These fossils shows that the Leiterneria family was not always made up of this one single species but had other members with possibly a greater range then the Leiterneria floridana.
Meet more trees on our website: www.ArundelTreeService.com  or follow our blog www.MeetATree.com
Posted by Arundel Tree Service at 12:22 PM