The Lombardy Poplar - Populus nigra "italica" - is an upright/erect form of the European Black Poplar.  This tree was originally spread by cuttings in the Po Valley of Italy and introduced in Britain in 1758, It's spread continued rapidly through Europe once introduced.   Today this tree can also be found in every state in the United States and throughout Southern Canada.  The roots of the Lombardy Poplar are considered to be invasive, they seek water sources (like drain pipes and ditches) and spread very much like Bamboo. Even when the tree is removed and the stump ground out the root system will remain and often resprout in another location nearby. 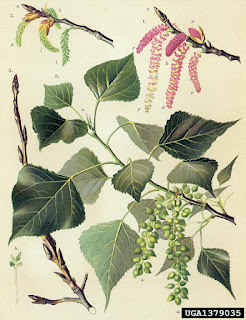 Image Citation: Zelimir Borzan, University of Zagreb, Bugwood.org
Description: Branchlet with male catkins (a - f) and a closed terminal vegetative bud of a new leader (k). - 2. Branchlet with female catkins (g - i, l) and closed terminal vegetative bud (k). - 3. Branchlet with developed shoots and with ripe fruit-catkins (a, b). There are numerous seeds in a capsule. Stipules at n. - 4. Seedling with cotyledons and first ordinary leaves. - 5. Winter-branchlet. After Hempel & Wilhelm, 1889. Photos and explanations from the book: Zelimir Borzan. "Tree and Shrub Names in Latin, Croatian, English, and German, with synonyms", University of Zagreb, 2001.
It has shown notable decline in some regions of North America due to pests and disease, most notably Borers, Cankers and Bacterial Wet wood.  Pest damage to the Lombardy Poplar is commonly seen in Maryland, Pennsylvania, Arkansas, Oklahoma, Idaho and Montana-but is by far at it's worst in Texas.  With the exception of the areas most prone to pests this tree seems to thrive in North America, especially in the Southern Canadian range.  Professional Landscapers, Arborist and Tree Experts are not very quick to recommend planting of Lombardy Poplars because of their relatively short life span, on average only 15 years.  They do however offer a rapid growth rate, perfect for creating a privacy screen in a shorter amount of time then the much slower growing more long lasting Spruce or Arborvitae (for those of us who may be a bit impatient!). 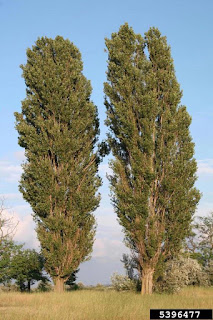 Image Citation: Robert Vidéki, Doronicum Kft., Bugwood.org
With their upright nature the Lombardy Poplar tends to begin branching out close to the ground.  When mature they can reach average heights of  40-50 feet tall, but a spread of only 10-15 feet.  In the Spring and Summer their leaves are a crisp green changing to a golden yellow in the Fall. They are recommended to be planted in zones 3-9.
If you like the appearance of this tree but do not want to take on the high risk for the reward, the more pest resistant alternative is the European Aspen - Populus tremula "erecta" it has a similar appearance and growth habit.
Meet More Trees: www.ArundelTreeService.com  or www.MeetaTree.com

Posted by Arundel Tree Service at 8:54 AM