Catawba Rosebay - Rhododendron catawbiense is distinguished by it's large pink flowers and evergreen leaves with bases that are rounded. It is an evergreen shrub or small tree that reaches heights of only 9-22 feet tall. It grows in a shrubby fashion, often branches closest to the ground. It is native to Mountain slopes, ridges, balds from 500-2000 rarely at lower altitudes. Found from Virginia and West Virginia south to North Georgia, west to Kentucky and northeast Alabama. 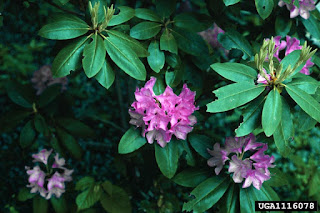 Image Citation: Charles T. Bryson, USDA Agricultural Research Service, Bugwood.org
The bark of the Catawba Rosebay is smooth when young, becoming furrowed and shredding with age. The leaves are alternate, simple, narrowly broad and elliptic. In extreme cold or drought the leaves often curl under. The upper leaf surface is a dark lustrous green in color, while the lower surface is a paler green. The flowers are considered to to be a Corrolla Pink in color and are in a broad bell shape that can reach up to 6 cm in diameter. The petals and sepals number 5 each with 10 stamens, flowers occur in early Summer annually. The fruit is a linear or oblong capsule that is covered with red-brown hairs, the fruit occurs on erect stalks and mature between late Summer and early Fall.
Meet more trees on our website www.ArundelTreeService.com or follow our blog https://arundeltreeservice.meetatree.com/
Posted by Arundel Tree Service at 9:13 AM