Apricot - Prunus armeniaca is most easily recognized by the combination of broadly ovate to almost perfectly round leaves, pink flower buds and hairy fruit with stone inside. It is a small deciduous tree that reaches heights ranging from 16-30 feet on average. Originally introduced from China it is now found on roadsides and disturbed sites from 20-1600 m in the East from Pennsylvania in the North, West to Illinois and Missouri and South to Kansas. The Apricot grows in an upright erect fashion with a single trunk and rounded crown. 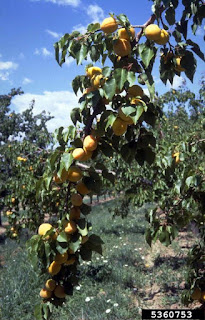 Image Citation: Eugene E. Nelson, Bugwood.org
The bark of the Apricot is deeply furrowed and Gray. The leaves are Alternate, simply shaped, broadly ovate to almost circular. The upper leaf surface is hairy along the veins, and the blades are 3-9 cm long. The flowers are 1.5-2.5 cm in diameter, 5 petals, pink when inside the bud, opening to a crisp white in Mid-Spring. The fruit is hairy, rounded or ellipsoid drupe, yellow to orange in color.

Image Citation (Leaves/Fruit): Howard F. Schwartz, Colorado State University, Bugwood.org
The Apricot fruit matures in Summer and is sold commercially. Turkey is the number one country for Apricot production, followed by Iran, Uzbekistan, Algeria and Italy to round out the top five. The United States is not a major producer of Apricots and is not even in the top ten based on production numbers. Apricots are produced commercially by most countries with the climate to support their growth this includes The United Kingdom, Australia and The United States (mainly California, Washington and Utah) to name a few. 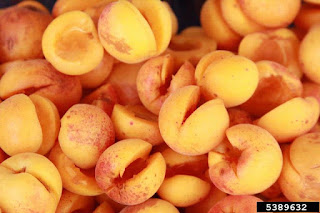