The Wax Myrtle / Southern Wax Myrtle - Myrica cerifera or Morella cerifera is a small evergreen shrub or small tree, that reaches heights of only 36 feet tall on average.  The Wax Myrtle most often forms in colonies from underground rhizomes.  Growing in an erect, leaning, or ascending form with multiple trucks and low branching habit that usually begins close to the ground.  The crown is dense and branches grow in upright or ascending. Native to a wide variety of habitats including bogs, fresh water banks, bracish water ponds, inlets, swamps, hammocks, swales and mixed upland woods.  Found mostly in the Southeastern coastal plains from Maryland and Delaware throughout south Florida, west through southern Arkansas and eastern Texas. 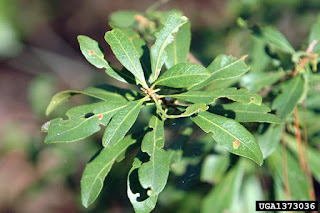 Image Citation: Chris Evans, University of Illinois, Bugwood.org
The leaves are alterante and simple in form, aromatic when crushed, tapered at the base, blunt or rounded, margins along the entire length of the leaves and toothed at least near the tip.  The upper surface dark green, while the underside is paler in color.  The flowers male and female on separate plants, petals and sepals are absent, inflorence occur erect at the leaf axil.  The fruit is rounded whitish gray in color, in a waxy nutlike drupe, 2-4 mm in diameter, maturing between Summer and Autumn each year. 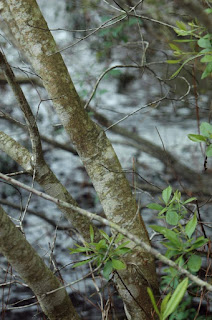