Broadleaf Mistletoe (Phoradendron spp.) is an evergreen plant that is parasitic in nature, it grows freely on a variety of large landscape trees. Some deciduous host trees of broadleaf mistletoe include Apple, Ash, Birch, Boxelder, Cottonwood, Locust, Maple, Oaks Walnut and Zelkova to name a few. Conifers are not found to often be host of the Broadleaf variety, but can host the dwarf varieties.

Mistletoe plants often develop in rounded form and can reach upwards of two feet in diameter. The plants develop small whitish colored berries that are sticky to the touch. Mistletoe plants are leafy and evergreen becoming most visible in the winter when the deciduous host trees have dropped their leaves. The plants are either female (berry producers) or male (pollen producing only). Many birds feed on the berries and excrete the living seeds which stick to any branch they land on. Older and large trees are often the first to be infested because birds prefer to perch on higher limbs. The down side of this is a heavy build up of mistletoe is most likely to occur in these same larger trees as the birds enjoy feeding on the berries of the mature Mistletoe plants. Often times growths in the upper branches will drop seeds to the lower sections below, spreading the growth even more. Dwarf Mistletoe does not spread in the same way as Broadleaf, instead it's seeds are forcibly discharged from the fruit, dispersing up to 40 feet away. 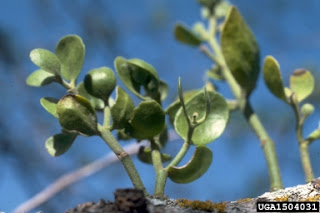 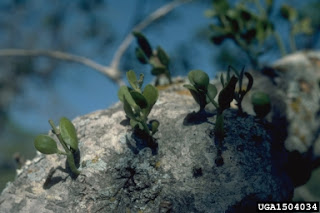 Image Citations (Photos 1 & 2): Paul A. Mistretta, USDA Forest Service, Bugwood.org
Once a seed is in place the seed will germinate, during this time it will begin to grow through the bark of the tree and into the tree's water conducting tissues. Within the tissues, structures similar to roots form, they are called haustoria. Haustoria will spread as the parasitic bush grows and spread. Young growths are slow growing and may take years before they bloom for the first time, their succulent stems become woody over time at the base of each growth. Even if an entire visible growth is removed from it's host plant, it will often resprout directly from the haustoria that is embedded into the host. On the other hand dwarf mistletoe is not woody when mature and is segmented with small scale-like leaves.
Mistletoe can be harmful to a tree that is already weakened but generally does not harm normal, healthy trees. It is possible for individual limbs and branches from healthy trees to become weak or die back. In instances of heavy infestation the entire tree may be stunted, weakened or killed if there are other factors such as disease or drought.
The most effective way to control mistletoe is to remove the infested branches, this will eliminate the haustoria which will prevent re-sprouting. Infested branches must be cut at least 1-2 feet from the base of attachment to be sure you are removing all of the haustoria from the inner tissues of the host. In cases of heavy infestation it may be recommended to remove the entire tree as you can not safely remove more then a portion of the trees crown without causing severe damage or death to the tree itself. If you are not able to prune the tree to eliminate the growth, completely removing the visible mistletoe growth annually will often help limit the spread as only mature growths can produce seeds.
More Cool Tree Facts: www.ArundelTreeService.com or  follow our blog:  www.MeetaTree.com