The West Indian Almond - Terminalia catappa, is a deciduous tree that reaches heights of around 75 feet.  It grows in an erect form, generally with a single straight trunk sometimes becoming wider at the base with age.  It is easily identified in the Fall because of the large whorled leaves that become a bright crimson color in the fall.  Originally introduced from he West Indies but is cultivated and has become naturalized in hammocks and coastal areas of South Florida and the Florida Keys.  It is similar to Wild Almond (Terminalia arjuna), which is also naturalized in Southern Florida but the leaves are more or less oblong or oval rather then distinctively obvate. 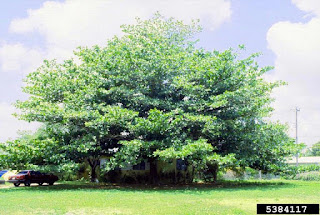 The West Indian Almond has branches borne in whorls that are often drooping.  The bark is smooth and a steely gray when young, becoming scaled with age.  The leaves are alternate, crowded near branch tips in an almost umbrella like form.  The leaves are simple, leathery in texture, narrowing to a short point with margins along the entire leaf.  The upper leaf surface is dark green in color with obvious veining, becoming crimson in the fall.  The flowers are bisexual and unisexual, borne in an elongated spike from the leaf axis, occurring in the early summer each year.  Flowers are absent of petals, having 5 sepals and are green-white in color.  The fruit is a flattened, fleshy, almond shaped drupe, green when young becoming yellow and then finally red or blackish-green when ripe.  The fruit reaches sizes of 5 cm long and matures between late Fall to early Winter. 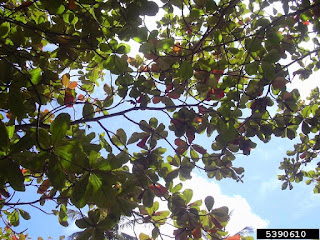 Meet more trees on our website www.ArundelTreeService.com or follow out blog http://arundeltreeservice.meetatree.com/
Posted by Arundel Tree Service at 9:22 AM