Thought to once be extinct until it's rediscovery in 1944, the Dawn Redwood - Metasequoia glyptostrobboides - is the smallest of all Redwoods. Reaching a max recorded height of 200 feet at maturity - it is still a giant tree by normal standards.  It is native only to the Hubei province of China, but is now planted widely as an ornamental in both residential and commercial landscape settings.  Seeds collected from an expedition performed by the Arnold Arboretum of Harvard University were sent in 1948 to all of the botanical institutions that were active at the time.  These seeds were planted in 1948-50 and many remain growing in botanical gardens and parks today.  The largest specimens remaining from this mass seed planting are (1) at The Bailey Arboretum on Long Island, (2) at James Blair Hall in Willamsburg, VA, (2) near Carnegie Lake in Princeton, NJ, (1) at Willow Wood, NJ, (1) Washington Arboretum in Seattle, (1) at the Los Angeles State and County Arboretum, CA.

Fossils have shown that during the Paleocene and Eocene periods there were vast forests of Dawn Redwood ( and other metasequoia varieties) throughout the northern portion of North America. In Badlands National Park large petrified trunks and stumps of the Metasequoia occidentalis a very similar tree in this same family that is now extinct, make up the major portion of Tertiary fossil plant material in the badlands of western North Dakota. Upon rediscovery the Dawn Redwood was hailed as a living fossil as the taxon was believed to have become extinct during the late Miocene period. This tree is very unique in the fact that it lived along side the Dinosaurs and has survived, a feat that is limited to very living things. 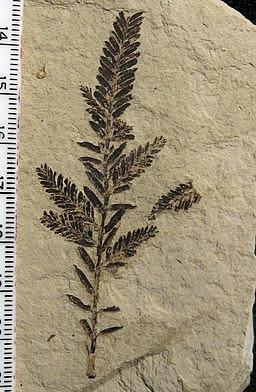 The Dawn Redwood is a fast growing deciduous tree that can grow up to 4 feet in a single year. The leaves are small and feathery and similar in appearance to the Bald Cypress, they are green on top in the Spring changing to and orange to reddish brown in the Fall. It differs from the Bald Cypress in the leaves and shoots being opposite one another, the crown being more open and the individual leaves being larger, broader and opening two months earlier in most areas. Although it is closely related to the Giant Redwoods it is deciduous like the Bald Cypress and often compared to both. It is recommended to be planted in zones 5-8. They make for a great shade tree but be aware when planting that they grow very tall and average 75-100 feet with a spread on average of 25 feet, in most settings. They enjoy full sunlight and grow in a pyramidal shape. Their branches provide great habitat and winter protection for many varieties of animal & birds.  They are available at some larger nurseries, if you can not find one locally they can also be purchased directly from The Arbor Day Foundation


Meet More Trees at www.ArundelTreeService.com or www.MeetaTree.com
Posted by Arundel Tree Service at 9:54 AM