The White Leadtree - Leucaena leucocephala is most easily recognized by the combination of bipinnate leaves, compact heads of creamy white flowers and flattened red-brown legumes.  It is a deciduous or evergreen shrub or small tree that reaches heights of only about 15 feet tall.  The White Leadtree grows in an erect or upright fashion with a single trunk and spreading crown habit. Originally introduced from the West Indies it has been cultivated and escaped cultivation in Southern Florida and South/Eastern Texas.  In all areas of the United States the White Leadtree is found growing it is considered to be invasive and poses a threat to native weaker plants. 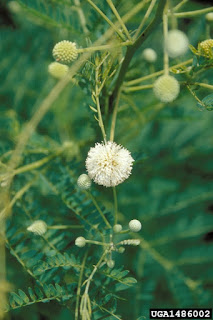 The White Leadtree has alternate bi-pinnate leaves with blades that are 8-10 cm long and up to 13 cm broad with 4-9 pairs of primary segments.  Leaflets 10-20 opposite pairs per segment 8-14 mm long, oblong, with pointed tips and a gray-green upper surface.  The flowers are bi-sexual, produced in rounded creamy-white heads that are 1-2 cm in diameter on stalks that are 2-3 cm long and 2-4 cm broad.  The fruit is a flattened reddish-brown legume ranging in size from 8-15 cm long and 2-4 cm broad born in crowded dangling cluster and occurring year round. 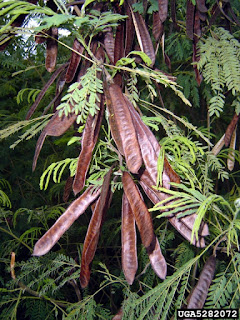 Leucaena is a small genus of only 22 species that are distributed mostly in the American tropics only 2 are native to North America none in the East.  The White Leadtree is similar in appearance to the Wild Tamarinds - Lysiloma, which also have white flowers only theirs are not born in compact heads. 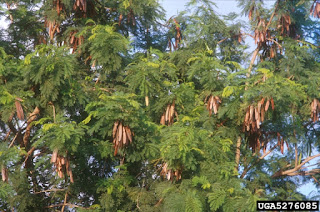