The Willows (Salix) form the largest group of woody plants native to North America with at least 90 species 50 hybrids, and over 300-400 varieties recorded worldwide.  Willow trees are commonly know to be water seekers and are not recommended to be planted near waterlines, foundations, or pools.  This includes the most recognizable of the group the Weeping Willow. Willow trees generally survive or even thrive after major floods where other trees can not.  Willow trees are used in Enkoping, Sweden to clean sewage sludge, reuse waste water, and recycle liquids from landfills.  The town spreads it's waste around the trees, which in turn decomposes and recycles it. 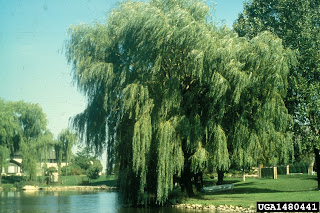 Some of the many Willows you may come across include (but are definitely not limited to) Purpleosier, White, Black, Yellow, Weeping, Coyote, Sandbar, Short Fruit, Coastal Plain, Netleaf, Corkscrew, Dragons Claw, Bog, Bebb, Artic, Desert, Diamond Leaf, and Heart Leaf just to name a few.


Willows are commonly used in landscaping and when planted in an area where there is adequate space can provide a very dramatic focal point.  They are commonly planted along streams, ponds, and River banks.  Willow trees are rarely planted as street trees because of their weak wooded branches.  Black Willow trees are rarely planted but are very common within their natural range. They are often found in or beside swampy bottom lands and are the tallest of all the Willows.

Pomo Indian Tribe are recorded to have boiled the inner root of the Willow to make Tea. This tea was ingested it in strong doses to induce sweating in cases of fever and chills. In the South, the Natchez prepared fever remedies from the bark of the Red Willow. The Willow was given the nickname toothache tree as it was commonly chewed to relieve toothaches and headaches.

Phyllactinia guttata is a type of powdery mildew fungi that is known to parasitize Willows.  Willows are not known to be susceptible to any type of Wilt.  Leaf blight is the most destructive of all the diseases of Willows in the United States, it is almost always associated with black canker.  There are also several types of Aphids that can infest Willows, the most common being Longistigma caryae. 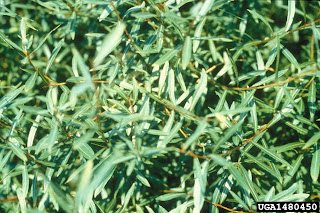