The Norway Maple - Acer platanoides - is a Medium-Large Deciduous Tree that is extremely sturdy.  The average height when mature is between 60-100 feet tall. This tree is known to withstand tough winters, ice, wind and even contact with road salt.   It is very similar in appearance to the Sugar Maple and the two are often times mixed within planned street plantings-this usually is a result of being confused for the same variety even at the nurseries.  Both are commonly planted as street trees for oth their consistent growth habit and their sturdiness.  It grows best in zones 3-7 here in the United States, but is actually native to Eastern-Central Europe from France to Russia and Scandinavia and much of Southwest Asia. 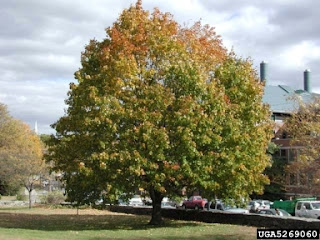 The Norway Maple has smooth and very finely fissured bark that has a shallow network of ridges.  It's sap is milky in consistency and not clear like some other Maples.   The flowers have prominent yellow petals that come out shortly before the leaves.  The wings on the fruit curve outwards away from on another, they are often referred to as helicopters because of the way they spin when falling to the ground.  The leaves begin as a bright green in the spring that changes to orange before becoming a bright yellow in the fall. 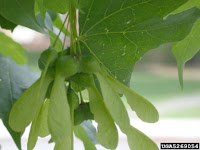 Meet More Trees  www.ArundelTreeService.com   or www.MeetaTree.com
Posted by Arundel Tree Service at 11:41 AM