There is a very unique English Oak tree (Quercus Robur) growing in Sherwood Forest near the small village of Edwinstowe, Nottinghamshire, England which is rumored to be where Robin Hood and his men would hide out, in it's hollow trunk sections. It is called the Major Oak and is estimated to be between 800 - 1000 years old. In 2014 it was even crowned "England's Tree of the Year", because of this honor it will represent England in the running for the "European Tree of the Year" against entries from both Wales and Scotland. 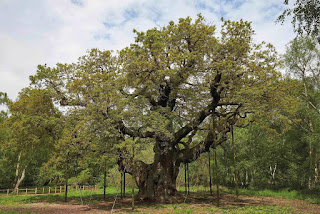 Image Citation:https://www.visitsherwood.co.uk/about-sherwood-forest/
Major Oak was not always the name this tree was called. It has also be recorded as the Queen Oak, and the Cockpen Tree. The current name "Major Oak", originated from Major Hayman Rooke's very popular book about the ancient Oaks of Sherwood Forest from 1790.
Estimated to weigh around 23 tons, it has a diameter of over 33 feet and a crown spread of 92 feet - it is claimed ot be the largest Oak tree in all of England.  The Major Oak has been in a conservation status since the early 1900's. When visiting the tree today you will find a fence surrounding the base of the tree which serves as protection for it's roots and truck from foot traffic. During the Edwardian period there were chains used to support the branches and lead sheets around the trunk, these were replaced in the 1970's by wooden supports, which were replaced by the steel support rods that remain in place today.
From the Sherwood Forest Visitor Center you are a 10-15 minute walk from this Majestic Old Major Oak. The visitor center is open daily (the hours vary by season) and allows you to explore not just the Major Oak but the 450 acre forest that is home to an estimated 900+ veteran Oak trees. If that is not enough to draw you in there is also an Annual Robin Hood Festival in August that celebrates the Legendary Home of Robin Hood and his Men.
To learn about other Destination Trees visit our website www.ArundelTreeService.com or our blog www.MeetATree.com
Posted by Arundel Tree Service at 1:20 PM