The Scarlet Oak - Quercus coccinea is most easily identified by it's deeply cut leaves in combination with 1 or more pitted rings at the acorn apex. It is a fast growing deciduous tree that can reach heights of 100 feet tall. Generally growing in an upright fashion with a single erect trunk that is more often then not swollen at the base.  It is native to the Eastern and Mid Atlantic regions of the United States from Maine in the North to Georgia, Mississippi and Alabama in the South, spreading as far West as Wisconsin. It is closely related to the Northern Pin Oak - Quercus ellipsoidalis, Shumard Oak - Quercus shumardii, Northern Red Oak -Quercus rubra and Pin Oak - Quercus palustris.

The crown of the Scarlet Oak is rounded and open with spreading branches.  This Oak has alternate, simply shaped leaves with 5-7 lobes each that range in size from 4-7 inches long. Leaves are bright green in the Spring and Summer and change to a brilliant Scarlet - Red in the Fall. The upper surfaces of the leaves are lustrous and hairless, while the lower is paler with tufts of hair in many of the vein axils. The fruit is a bowl shaped cupped acorn that is 7-15 mm deep enclosing 1/3 - 1/2 of the brown nut. Acorn crops are produced annually, however large crops are only seen every 3-5 years.The bark is thin, brown to dark gray in color, finely ridged and furrowed in texture. 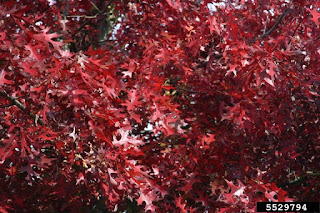 Image Citation: (Fall Foliage) T. Davis Sydnor, The Ohio State University, Bugwood.org
The Scarlet Oak is often planted for a combination of it's rapid growth, beautiful foliage, soil tolerance, wind resistance and upright habit. It makes for a lovely focal point in any landscape. Scarlet Oak prefers well drained slopes, dry uplands, ridges, and even does well in poor soils (except akaline). Full sun is recommended for best performance (6 hours of direct sunlight daily). The best performance for the Scarlet Oak naturally seems to be in the Ohio River Valley where specimens are many in number, long lived and lovely in shape. It also is a very successful part of the South Appalachian forest story. Scarlet Oak is recommended for hardiness zones 4-9 and can be found at most larger nurseries. It is widely used in park settings, along roadside and in residential and commercial landscape design. The Scarlet Oak is the official tree for The District of Columbia. Scarlet Oak acorns are an important food source various types of wildlife including, songbirds, wild turkeys, grouse, squirrels and white-tailed deer. 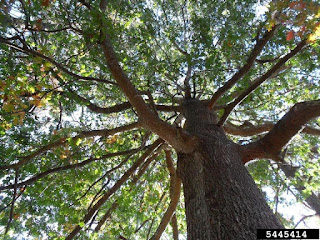 Image Citation: (Canopy from below) David Stephens, Bugwood.org
Meet more trees on our website www.ArundelTreeService.com or Follow our Blog www.MeetATree.com
Posted by Arundel Tree Service at 11:49 AM