The Black Maple - Acer nigrum (also called the Black Sugar Maple, Hard Maple, or Rock Maple) is a medium sized deciduous tree that can reach heights of up to 80 feet tall.  The tree generally has a relatively short trunk with large rounded crown full of long upward reaching branches. 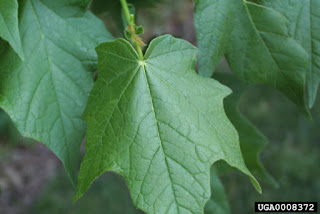 The bark of the Black Maple is black to brown in color with a silver gray layer on top.  The trunk of the Black Maple is often fluted which gives the tree a rougher appearance.  The leaves are simple and grow opposite from one another, as opposed to being side by side.  The lobes are often coarsely toothed before ending in narrow blunted tips.  The upper leaf surface is smooth, dark green in color, wile the lower surface is lighter and duller in finish.  The leaves become yellow to yellow brown in the fall before falling off.  The leaf stalk or petiole is long and often fuzzy. The bodies of the paired fruit are joined at the stem with flat wings hanging down from each side. 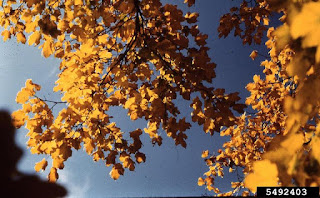 The Black Maple is very often confused with the Sugar Maple, with which it freely hybridizes.  Both the Black and Sugar Maple are tapped for Maple Syrup, planted as shade tree and sold in the commercial lumber market as hard Maple.  The Black Maple can be found growing from The Great Lakes in the North to Tennessee in the south. 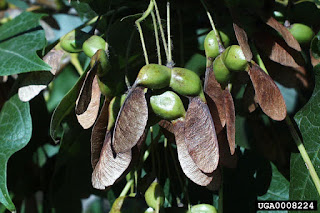 
Meet more trees on our website www.ArundelTreeService.com or follow our blog https://arundeltreeservice.meetatree.com/
Posted by Arundel Tree Service at 2:29 PM