Santa Maria - Calophyllum antillanum, is most easily recognized by the combination of oval leaves  with numerous closely set parallel veins and deeply pitted, diamond-patterned bark.  It is an evergreen tree, salt tolerant tree that originated in the West Indies but has become naturalized in South Florida.  This plant is considered to be invasive to mangrove forests and inland hammocks.  It is similar to the Alexandrian Laurel which is also naturalized in Florida but is distinguished by it's bisexual flowers with 200-300 stamens and fruit that is 2.5 - 4 cm long.  It is a member of the Clusianceae / Garcinia Family. 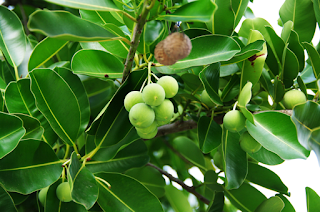 The Santa Maria grows in an erect fashion, generally with a single trunk occasionally with multiple low branches.  The bark is dark gray or nearly black, deeply ridged or furrowed.  The leaves are simple, opposite, thick, elliptic or oval in shape with a rounded (occasionally notched) tip.  The 5-8 cm long leaf surface is lustrous and dark green in color with numerous visible veins that are located very close to one another.  The fruit occurs as a rounded drupe that is 2-2.5 cm long and yellow or brown at maturity.  The flower is uni-sexual averaging 2.5 cm in diameter, fragrant with four white lobes and 40-50 stamens each.

The wood of the Santa Maria is used in tropics (not in the United States), the heartwood varies from yellow-pink to red-brown in color, the sapwood is lighter in color.  The grain interlocks and has gravity ranges from .51 to .57.  The wood is considered to be easy to work with and is considered above average when rated for shaping and sanding but not for turning and boring.  Santa Maria wood can be used for general construction, flooring, furniture, cabinet making, poles, cross ties and handles.

Meet more trees on our website www.ArundelTreeService.com  or follow our blog https://arundeltreeservice.meetatree.com/
Posted by Arundel Tree Service at 11:40 AM