The Catalpa is a Medium sized deciduous tree.  The northern catalpa grows to a height of 40–60' and a spread of 20–40' at maturity.  There are two main types of Catalpa grown in the United States, The Common/Southern Catalpa (Catalpa bignonioides) and Northern/Western Catalpa (Catalpa speciosa).  The Common Catalpa is a messy tree and should only be planted in areas where it's fruit and flowers are not an issue.  The Northern/Western Catalpa is a taller variety then the Common, it is a very hardy and a fast grower.  Catalpa are in the Bignonia Family, along with the Trumpet Vine.  There are only 11 species of Catalpa, the species are divided between North America, the West Indies and China.  Both varieties are found growing wildly in the majority of North America, with the exception of regions that are extremely dry and arid.

Flowering occurs in the middle of Summer but the Common and Northern Catalpa flower about three weeks apart.  The flowers are showy and White, borne in wide upright spikes.  The induvidual flowers have small orange blotches and stripes as well as purple spots inside.  Leaves are very large up to 10 inches long and dull green in color.  The leaves grow in opposing pairs or groups of three.  The fruits are long, thin, green pods that turn brown when ripe and split into two. 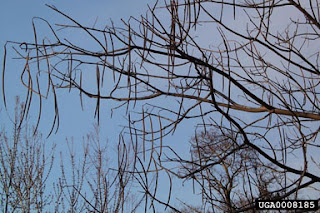 Northern Catalpa is recommended for zones 4-8.  This tree is considered a shade tree, a flowering tree and an ornamental tree. It features a spreading canopy capable of blocking sunlight, blooms profusily of spring flowers and adds visual interest and beauty to landscaping.  It is readily available at most nurseries in the native growth range.
Meet More Trees www.ArundelTreeService.com  or  www.MeetaTree.com